Welcome to 356 Meisel Ave in Springfield!

Located in the heart of Springfield, bordering one of the favorite natural parks in the county - this expansive cape cod exudes charm and character from the minute you walk in the front door.

Built in the 1950s this cape has been renovated to perfection - the attention to detail and craftsmanship is evident throughout this beautiful home.

Before you read on, view this short video of the property below:

The formal living room/ great room is flooded with light and vaulted ceilings, a fireplace, and large windows overlooking the large backyard. It’s a striking space but still very comfortable for family and friends. Screen a movie in the great room and afterwards spill out onto the sweeping deck. 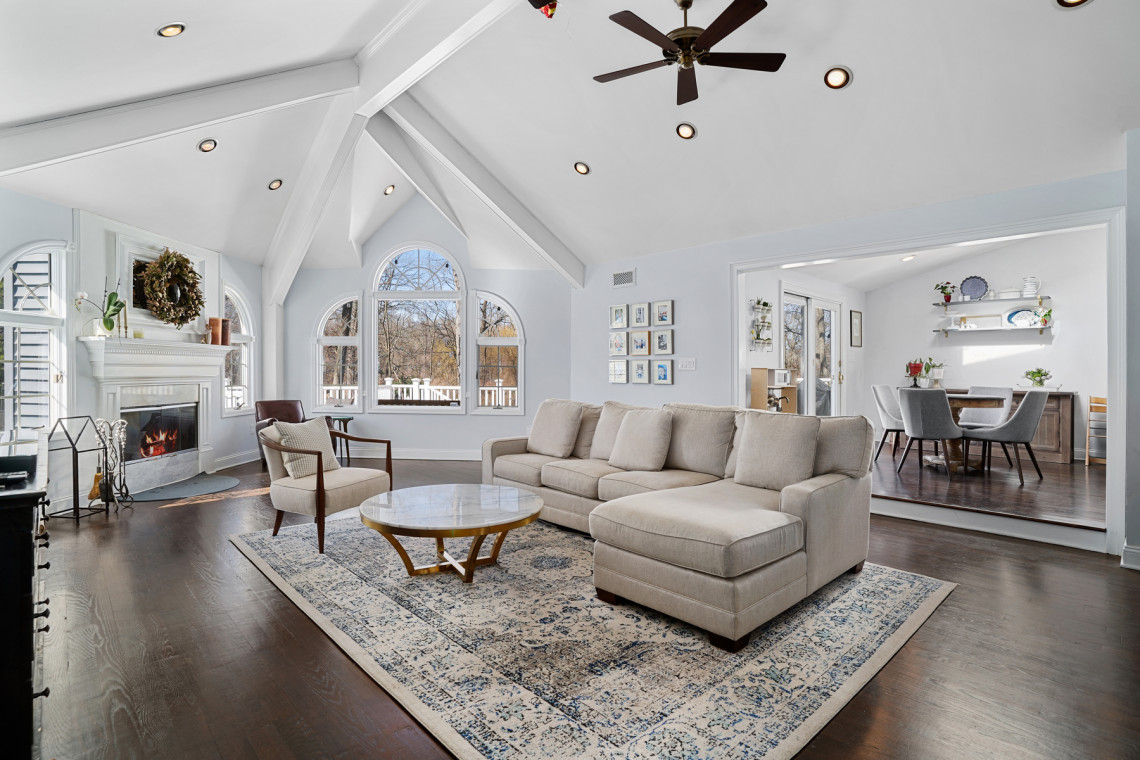 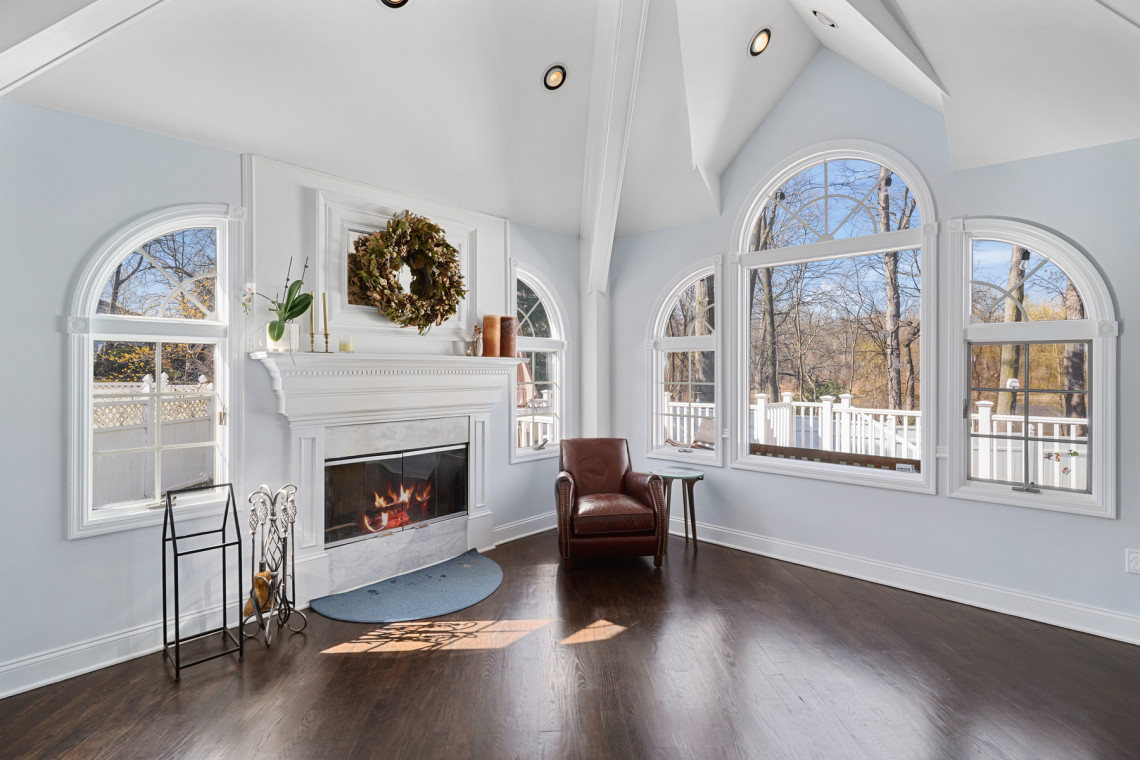 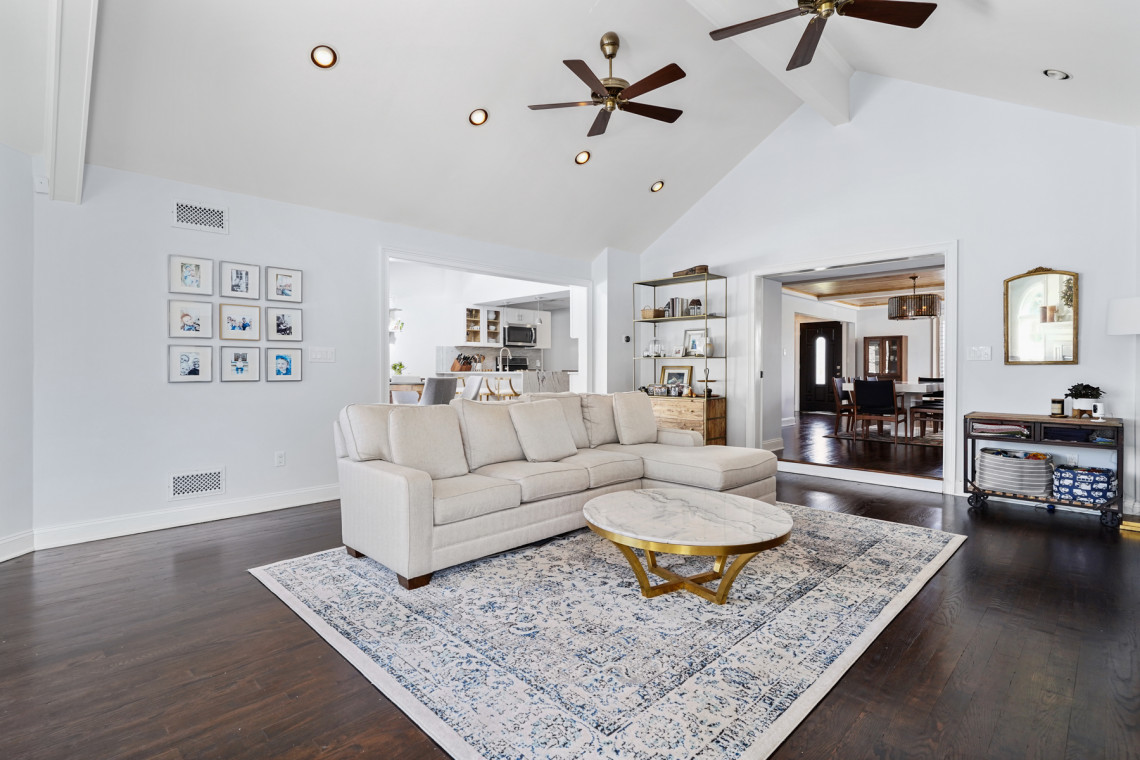 The gorgeous dining room impresses with custom French pocket doors, centerpiece wood burning fireplace and the touch of shiplap on the coffered ceiling. You’ll be proud to welcome guests into this warm and inviting room. 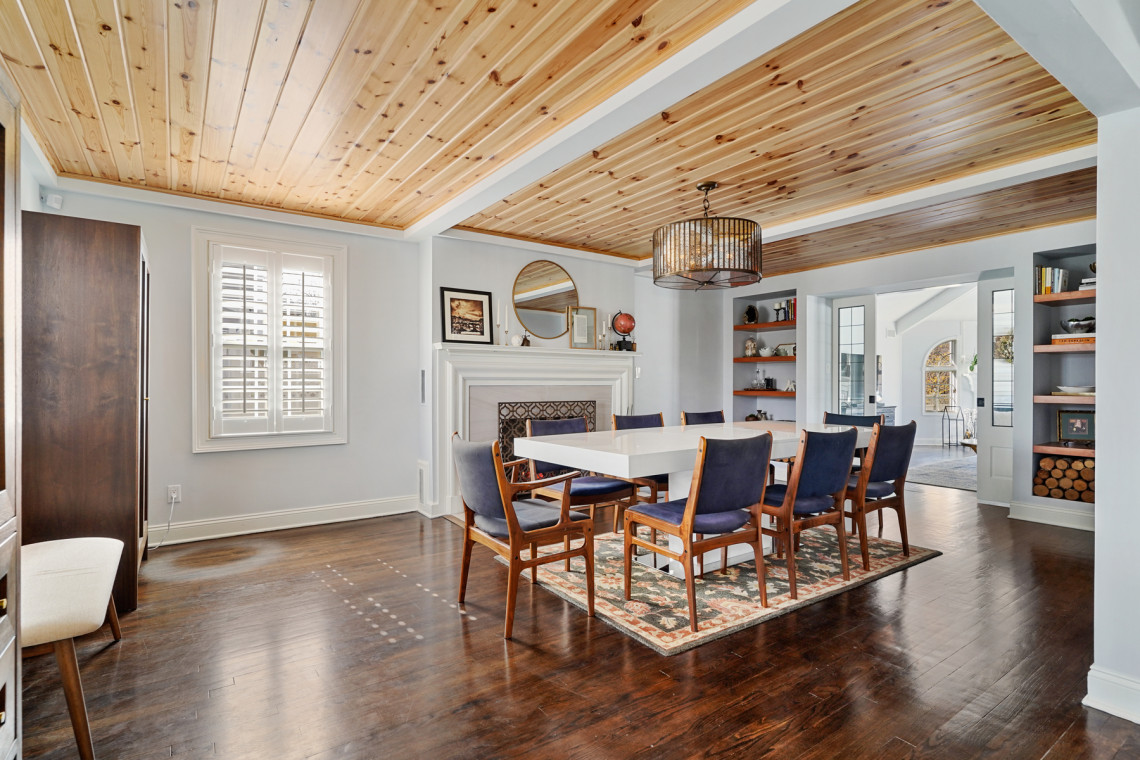 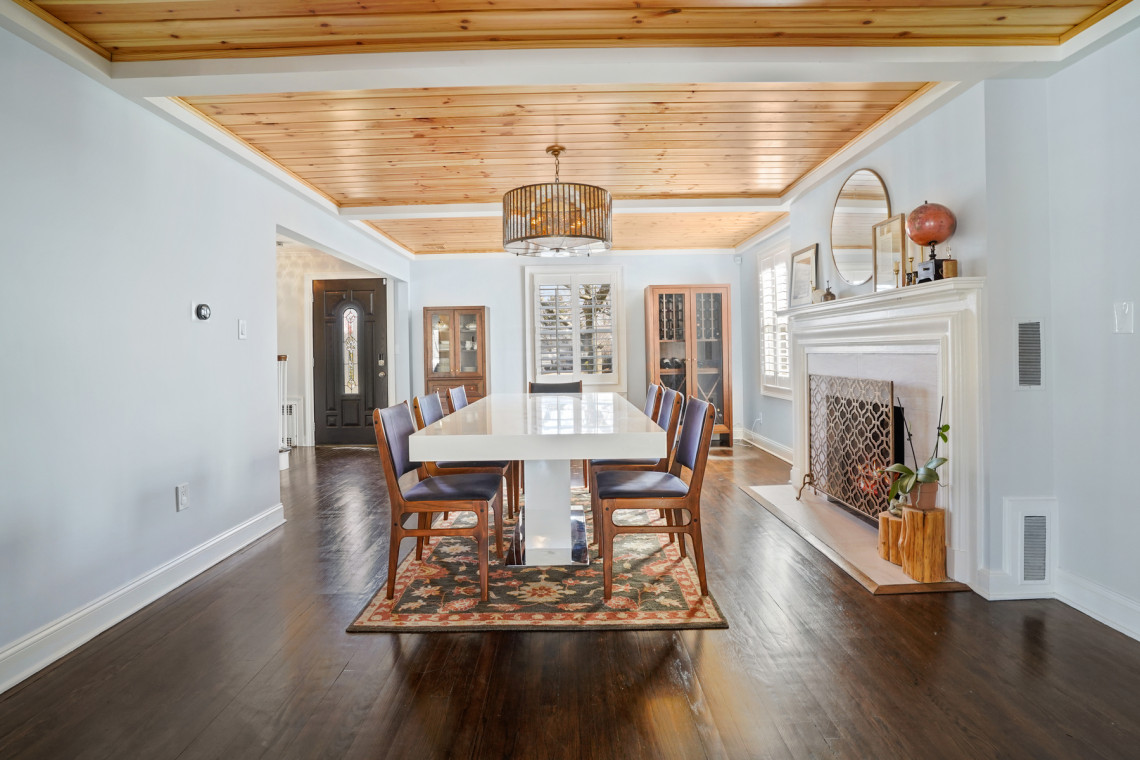 The renovated eat-in-kitchen is crisp and elegant! It is the perfect place to prepare a feast with all stainless steel appliances, granite counters, custom wood island, and separate dining area with sliders to the huge two-tiered deck and pond views. 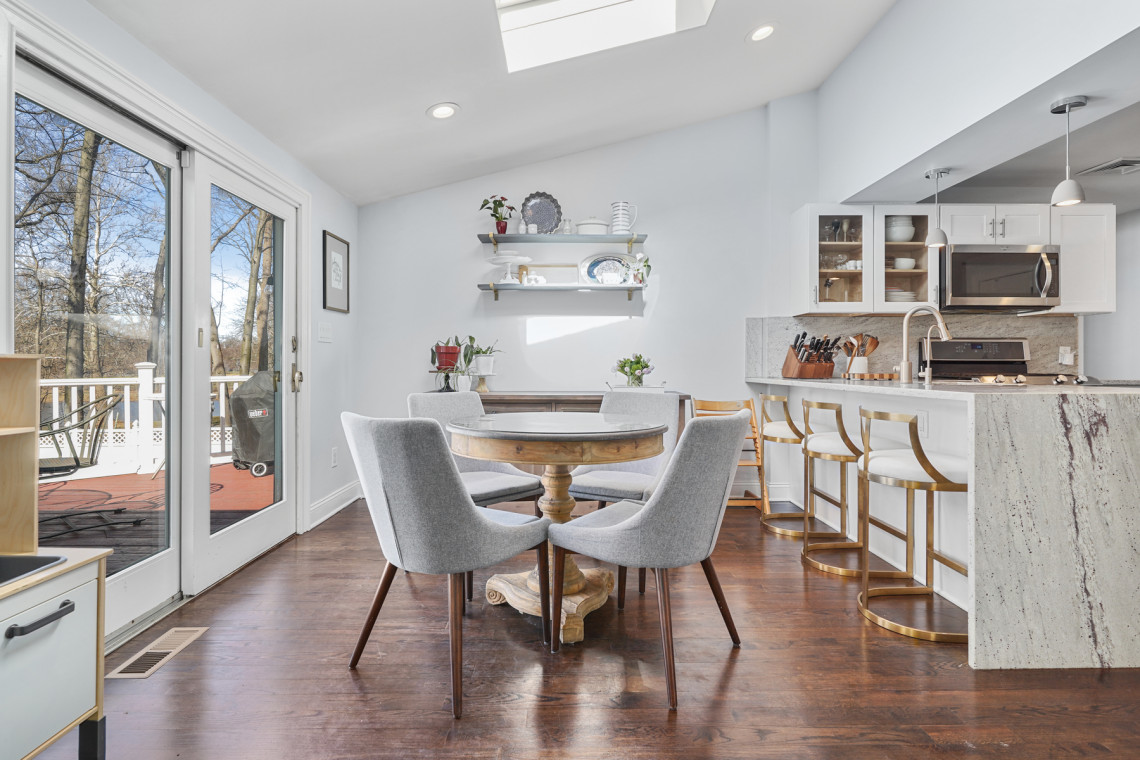 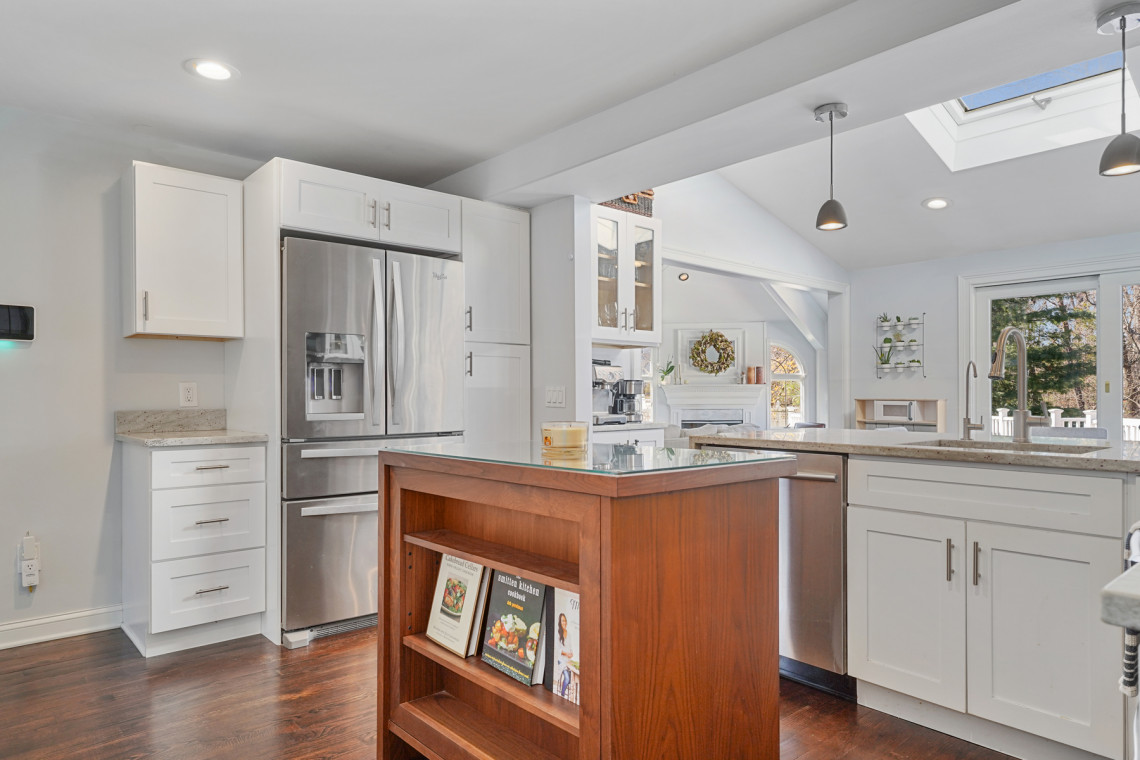 Also on this floor is a sun-drenched spacious primary bedroom with two walls of windows, a large walk-in-closet, and en-suite bath.

There is also a second bedroom or office and a convenient powder room. 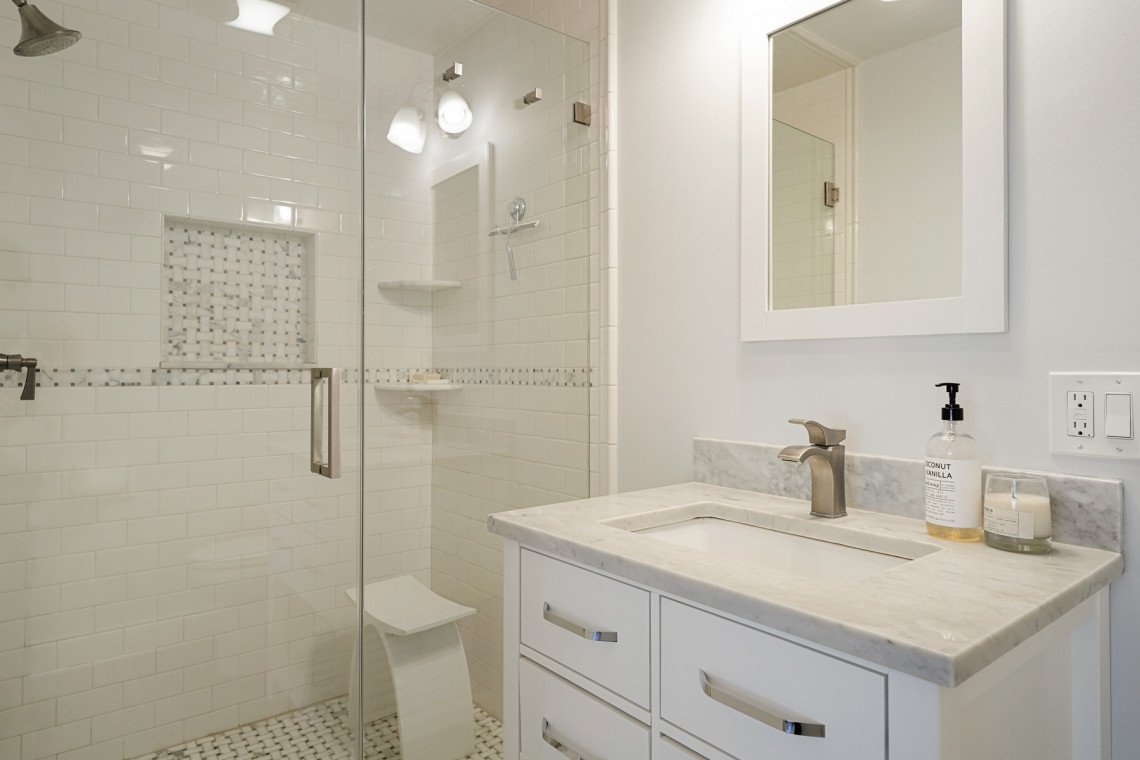 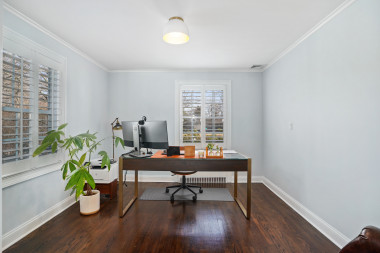 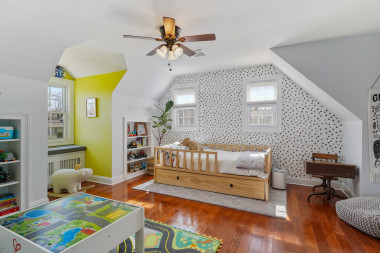 The finished lower level offers a large recreation space, a cozy office nook tucked under the stairs with a built-in desk, a modern laundry room, a half bath and access to the two-car garage with a separate workshop.

Special details can be seen in every room, making this home truly one-of-a-kind. 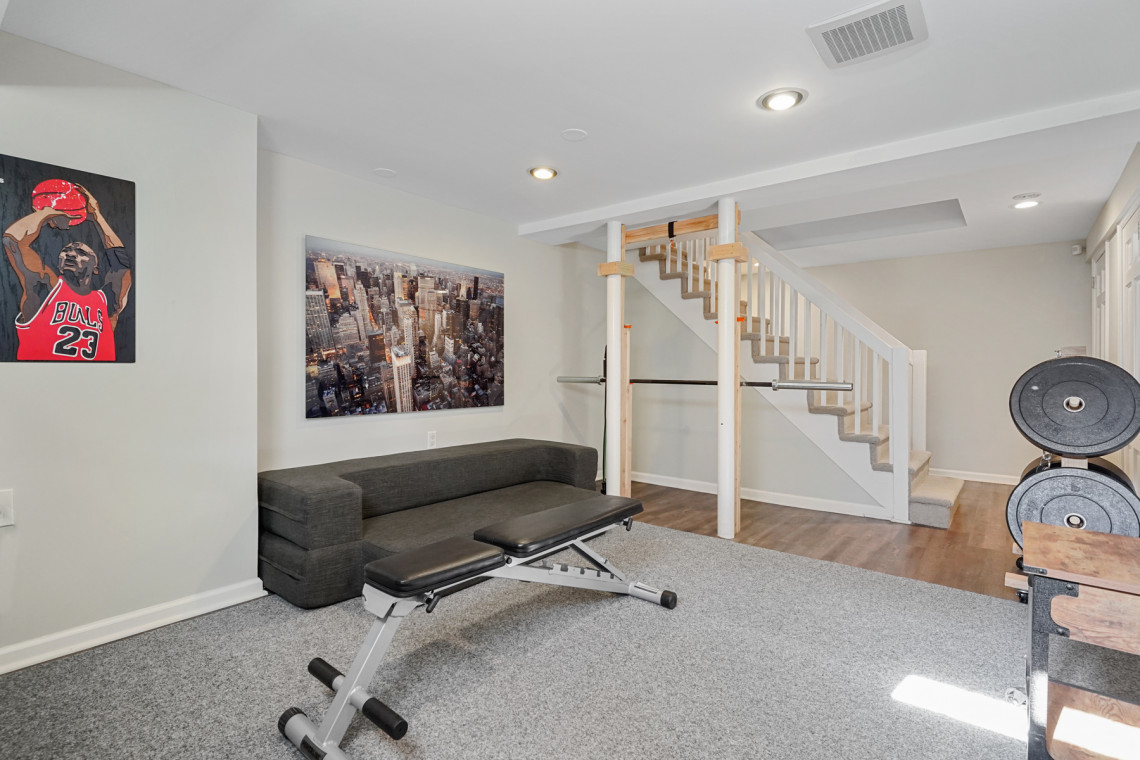 The two-tiered deck offers plenty of space for al fresco dining, sitting around the firepit or watching the sun set.

The beautiful backyard is the ideal place to unwind and enjoy the natural environment or have a summer soiree! It includes a large custom built playhouse/shed with finished interior. Watch the seasons change with your own private view of Meisel Avenue Park (a beautiful county park which encompasses 6,200 acres) situated right behind the house. Step out on your expansive deck and down to the private stone walkway to the park. Surround yourself in nature with miles of gorgeous pond and park views, fitness trail, running track, sports fields and fishing spots.

If peace and serenity are what you seek, this house is what you’ve been looking for! Nestled at the foot of the Watchung Mountains, just 25 miles southwest of New York City. Springfield has a population of approximately 17,000 residents over 5 square miles.

Commuters can get to midtown Manhattan’s Port Authority station via NJ Transit bus in about 50 minutes. While Springfield does not have a stop on the Midtown Direct train line, the town runs a jitney service mornings and evenings to the Short Hills Train Station where residents can hop onto it . In addition, commuters have easy access to major roads like Interstate 78 and U.S. Routes 22 and 24 that connect them to many towns in New Jersey as well as Manhattan.

Springfield has one pre-k and kindergarten, two schools enrolling children grades 1-4, one middle school grades 5-8 and a local high school. In June 2010, Newsweek named Springfield’s Jonathan Dayton High School as one of the best high schools in the county – only 6% of all public schools in the U.S. made the list.

Springfield has nine parks and a town pool. It is also home to the Baltusrol Golf Club, founded in 1895, which has hosted seven United States Open Golf Tournaments, including the 2016 PGA Championship.

According to Niche.com, Springfield gets an overall “A” rating and New Jersey Monthly magazine ranked Springfield as one the "Best Places to Live" in New Jersey.

The 6 Phases of the Home Buying Process

Get your home's value - our custom reports include accurate and up to date information.

Mark Yecies co-founded SunQuest Funding in July 2002 and brings a strong and rich history of financial services experience to the table. Mark graduated Washington & Jefferson College with double degrees in Math and Sociology. As an expert in residential real estate and mortgage lending since the mid 80’s, Yecies is frequently contacted by, and quoted in, the New York Times and other print and television news outlets. As part of his commitment to being a resource for his community, he serves as Vice President for the Executives Association of New Jersey and recently sat on the YMCA board of directors.