(Read about how this house went viral here!)

57 Jefferson Avenue in Maplewood, New Jersey offers a rare opportunity to own a unique home with a deep sense of history. Built circa 1765, the “Gildersleeve House”, as it is known, predates our nation. You can feel this in everything from the broad timber planks of the wooden floors, to the original Dutch doors, to the family bibles that are deeded with the property. 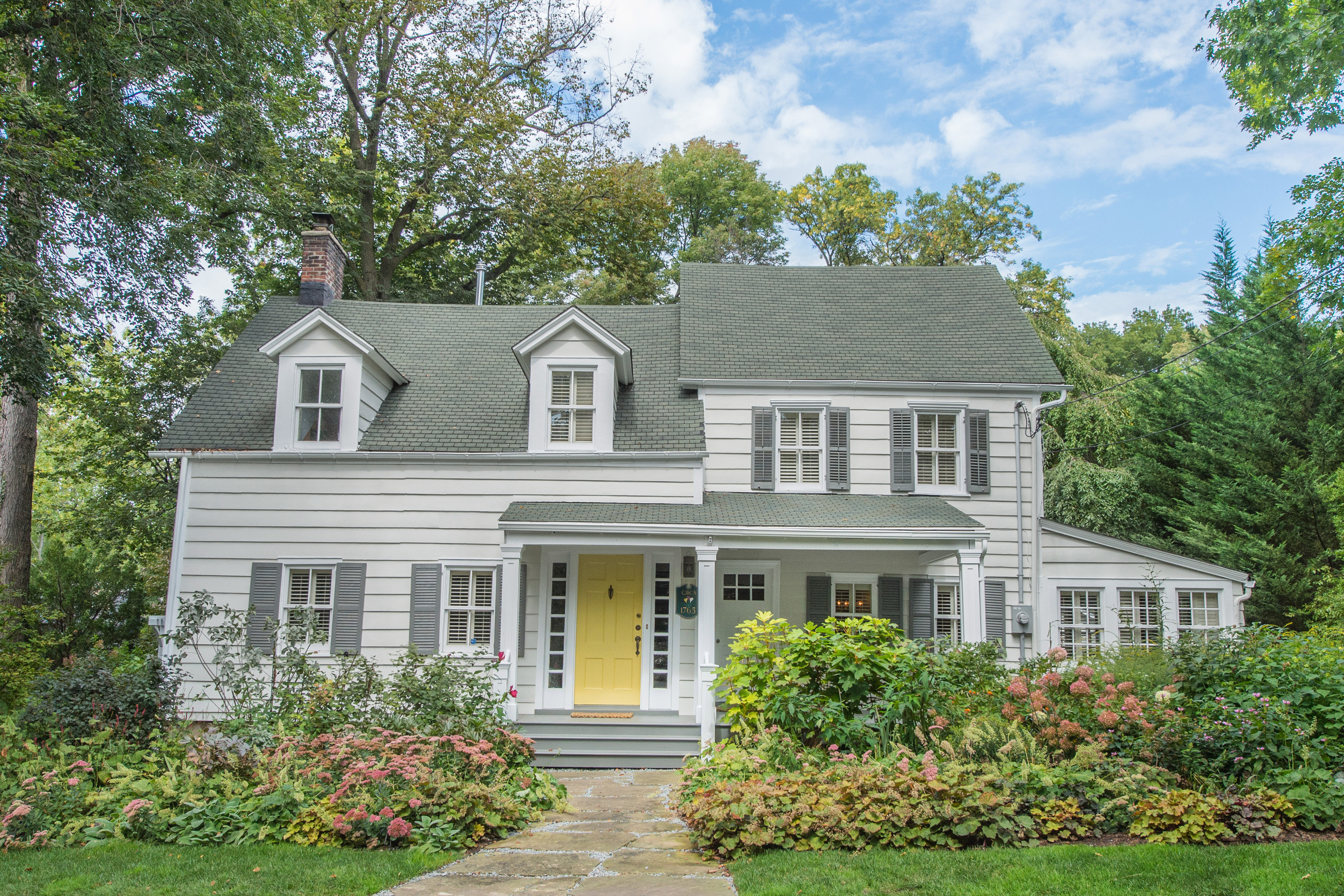 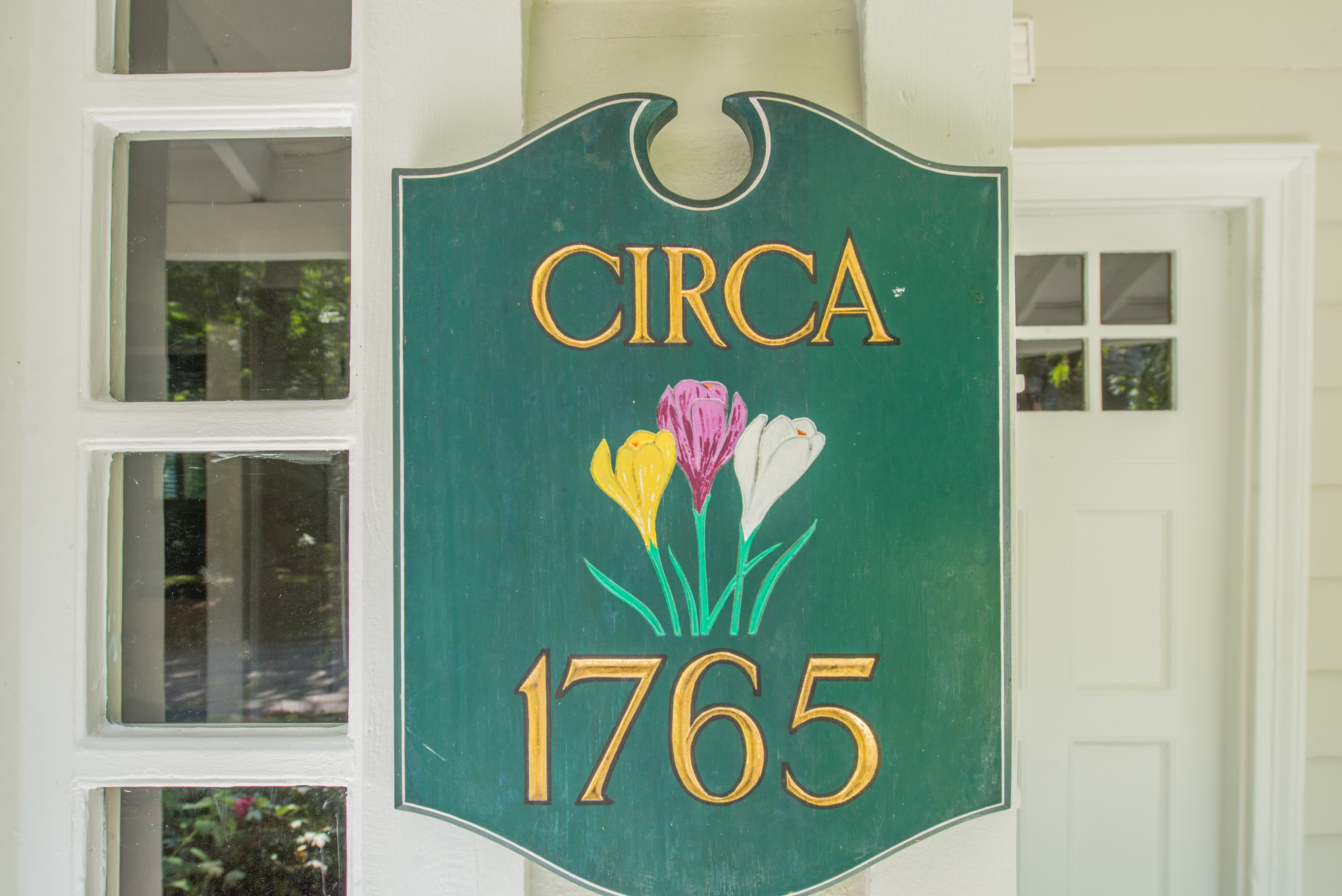 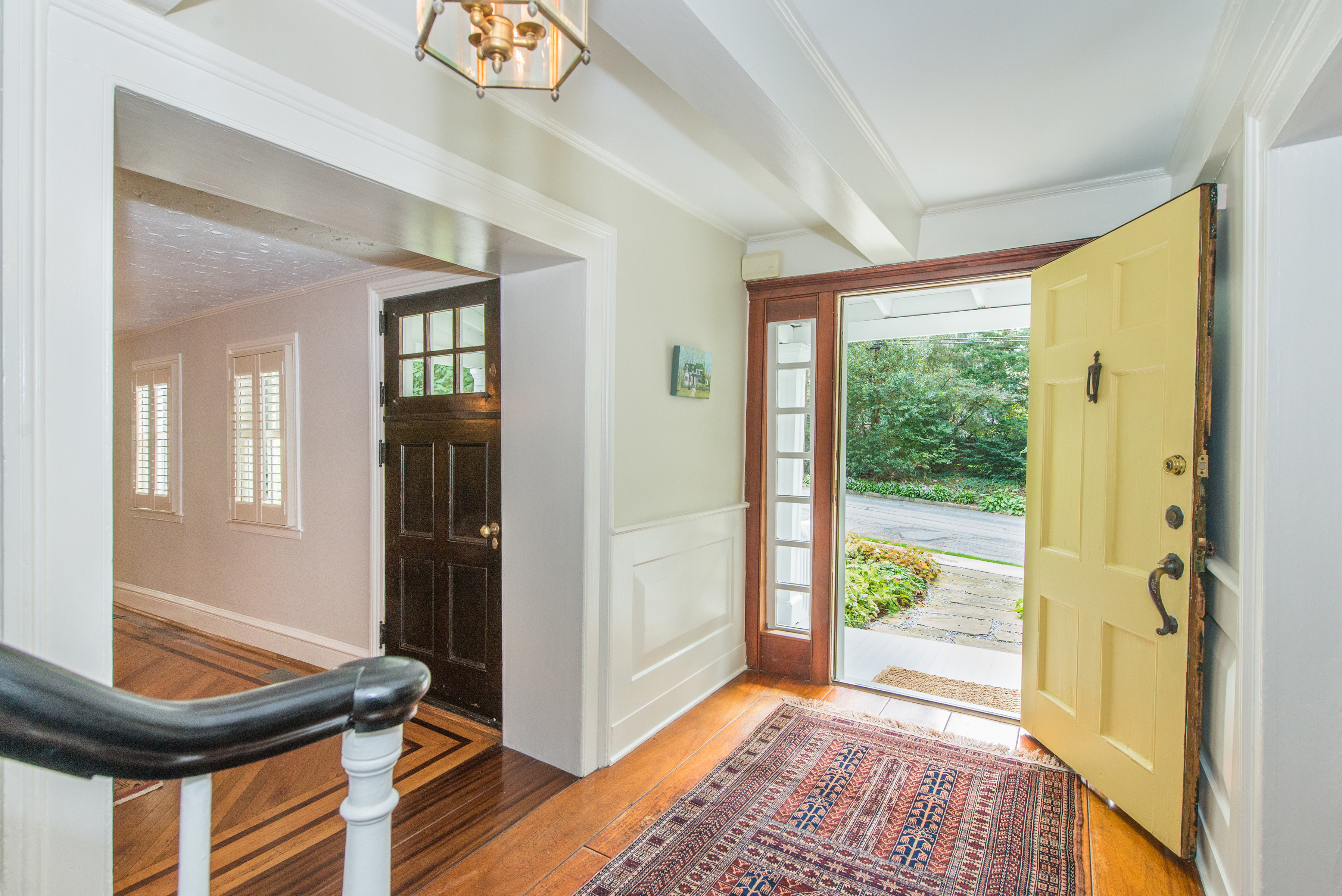 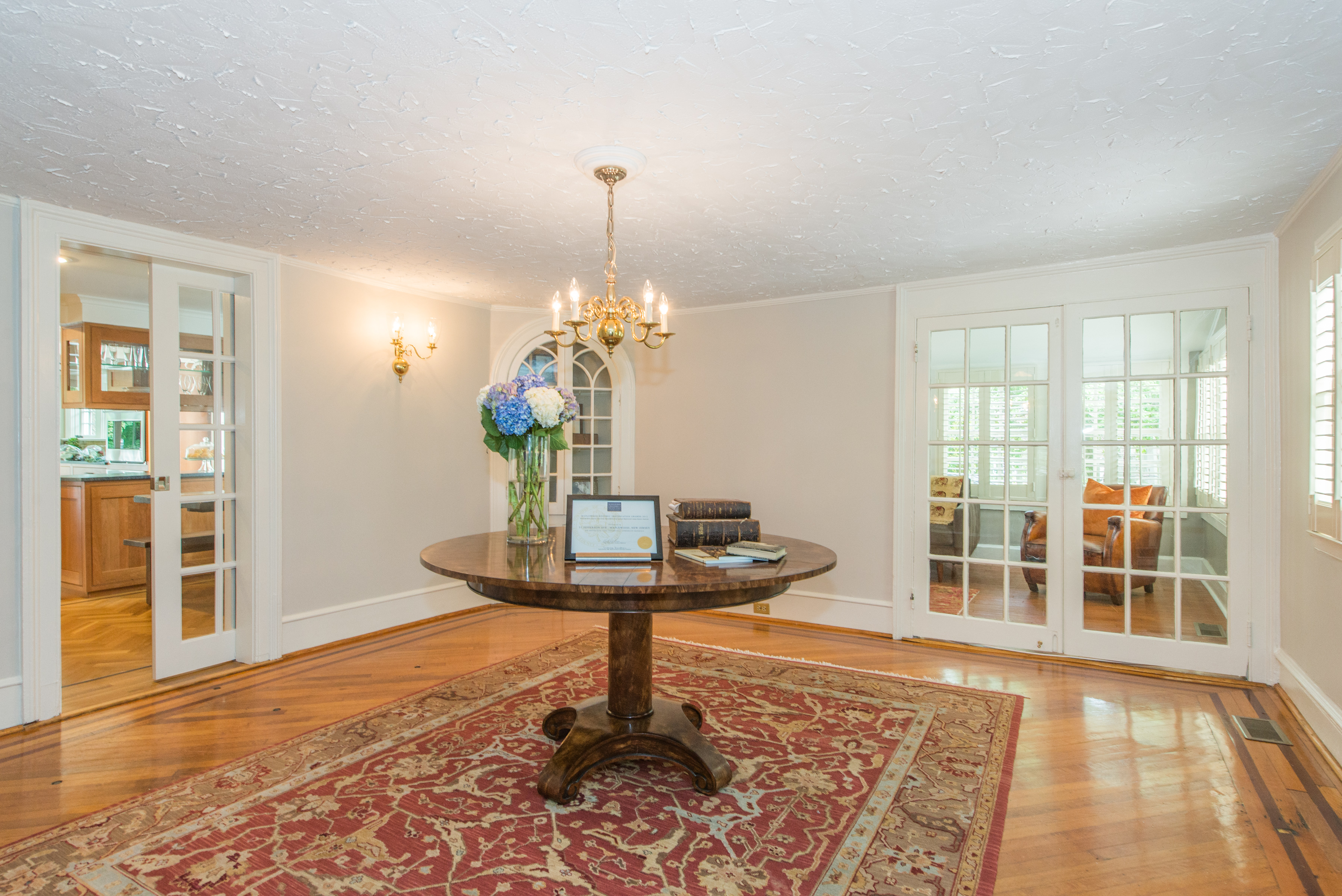 The property sits at a slight angle facing Jefferson Avenue on the North side of the street, mid-way on the block between Walton and Kendal Avenues - a truly coveted location, just blocks from Downtown Maplewood. The home can be described as a mix of farmhouse style with elements from popular contemporary styles through carefully designed and historically respectful renovation and additions over the years.

As you approach the house, you walk up the bluestone walkway with floriferous garden plantings on either side to the welcoming wrap around front porch.

Upon entering the classic Center Hall Colonial front foyer, to the right, you find the receiving room and beyond are French doors, which lead to the den/family room – perfect for unwinding after a long day.

To the left is the large formal living room with historical fireplace, which then connects, through glass-paned pocket doors, to the formal dining room, which has two walls of windows looking over the back garden. The home boasts an award-winning copper-and-glass roofed sunroom that does quadruple duty as a conservatory, succulent garden, mudroom and laundry room. This new addition to the history of this home is a welcoming, hardworking, and multi-tasking space that allows your imagination to run wild.

The multi-purpose room leads beautifully into a modern, light-filled eat-in-kitchen with a Wolf range, wall oven, plate warmer, interior grill, see-through hanging cabinets and built-in wine cooler – all designed by Clawson Architects, an Award winning and nationally recognized Architectural Design firm in Maplewood. Each of the Crimson Travertine floor tiles is a true work of art. The kitchen is a beautiful space to cook in and gather and has a beautiful view of the back garden and pool through generous floor-to-ceiling sliders to the back deck.

As you step onto the spacious second-floor landing, you have a spacious master bedroom with large closet overlooking the front gardens and four other generous sized bedrooms to choose from.

You have the option of using the front or back stairwell of this home, ripe with history and modern bliss. Towards the back of the house, two newly renovated luxurious bathrooms can be found, one with a large shower and one with a beautiful Clawfoot tub with a view of the pool, where serenity is yours. In addition to all of these wonderful amenities, a private gym awaits you with windows overlooking the lush landscape and pool.

From the second-floor landing, you rise up one more flight of stairs to find a huge open, finished space which can be used as a guest bedroom, private home office or a future Master Suite with gorgeous treetop views.

The front facade of the house faces South with a welcoming front porch which extends over the main entrance. Two gabled dormers with two-over-two double-hung wood windows, the red brick chimney visible at the roof ridge, historical porches and wood balustrades add to the presence and timeless appeal of the house.

The focal point of the backyard is the beautiful in-ground swimming pool and accompanying pool house, both enhanced by the bountiful grounds. The beautiful perennial garden and low stone wall, which extends around the west side of the house, is a testimony to the owners’ artistic skill in combining color and texture. The garden was planned out to have interest year-round, thus there is great display every season, from a massive spring bulb show to the goldenrods and perennial hibiscus in autumn. This landscaping masterpiece comes with surprisingly low maintenance, in part because of the automated irrigation system. The owners have routinely been asked to place it on local garden tours.

There is also a spacious two-car garage. 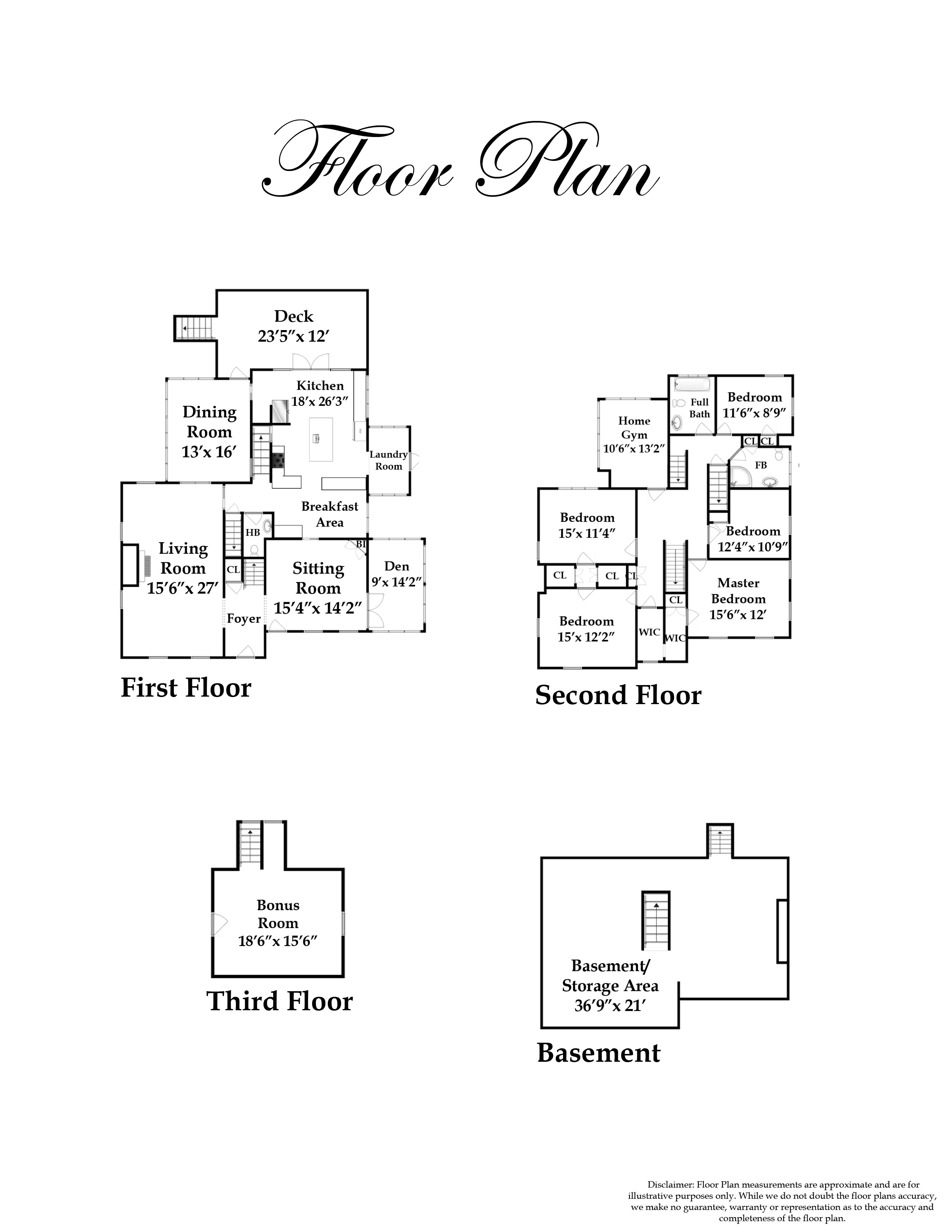 Designated a Historic Landmark by the Maplewood Historic Preservation Commission

The Gildersleeves, a family of English origin, were among the earliest landholders in the area. John Gildersleeve (1706-1790) was brought, as a child, to East Jersey by his father, Asa Gildersleeve, from Hempstead Long Island.

John eventually owned extensive lands used for farming and cattle in the Mountain District of Newark, which included the South Orange/ Jefferson Village area. A deed dating to 1753 refers to the Crooked Brook and Mountain Road and very well may cover the land on which 57 Jefferson Avenue is built. John was a founder of The Mountain Society, a satellite church of First Presbyterian Church in Newark, and a key influence in the settlement of the area

John’s son Ezra (1740-1810) was also a successful farmer in Orange (including the Jefferson Village area) and was a member of The Mountain Society. His grave, as well as his father's, is found in the First Presbyterian Church Cemetery in Orange. A deed dating to 1786 refers to a transfer of land by John to his son Ezra.

Upon Ezra’s death in 1810, he bequeathed to his son Joseph (1775-1846) “all those lots of land and buildings on the north side of the road upon which he now liveth.” Joseph would have been 35 years old. This could very well refer to the dwelling at 57 Jefferson Avenue and indicate that it was standing prior to 1810. Joseph probably farmed and according to one reference, woven rag rugs. In addition, in 1810, he was called to head up the Jefferson Village Baptist Society as its minister.

Anna Maria Gildersleeve, daughter of Caleb Gildersleeve, an inhabitant of the house, wrote several school essays while attending the school at Jefferson Village in 1849. These essays mention the forest and large farmhouse that are preserved in Newark. The house was a social center of what was then a rural farming community.

Below is one of the school essays written by Anna Maria Gildersleeve on April 17th, 1849.

Of all the feathered tribe the Humming Bird is the most beautiful.  It is covered with a beautiful crest of feathers and is streaked with colors which resemble Gold Silver purple… Its wings are almost all the time in consistent motion and they produce a humming sound, therefore it is called by the name of Humming Bird.  It is native of the warm climate in South America.  They are found in flocks in the woods.  They build their nests on the end of a twig which is covered with leaves and is rocked to and fro by every breath of wind.  Many of the birds are not larger than a Honey Bee.

Read about how we sold this home $150K over asking:

Show Me This Home