Please enjoy the property video below:

This Architectural Masterpiece is a True Sanctuary!

Nestled into its landscape, this 5 bedroom, 4 1/2 bathroom Contemporary home sits on over half an acre and is a combination of open concept living and natural splendor. It exudes a sense of remarkable privacy and serenity.

From the street, passersby see a crisp white ranch with a gently sloping galvanized steel roof. A year-long renovation resulted in a 28 foot-high steel and glass addition – which has become the home’s pièce de résistance!

The symmetry of the pre-existing ranch-style structure in the front is enhanced by the new modern square steel windows and marries well with the lofty new rising glass and steel structure in the back. The addition tripled the size of the 1300 square foot Ranch style home, which now measures close to 3600 square feet. 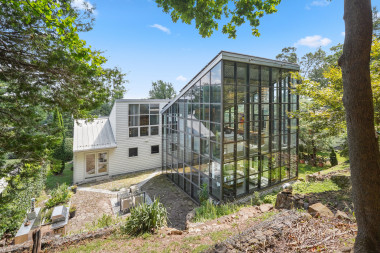 The overall design intent was to create light filled spaces that flow together in a dynamic fashion, all carefully thought out by the current owners working closely with celebrated architect Peter Forbes and his associate Tim Weil, both known for designing spaces that are pure, intimate, and spatially powerful.

The owners were inspired by modern architecture when considering a remodel. At a store on the Champs Elysées in Paris, they picked up a book titled “Ten Houses” by Rockport Publishers featuring the work of celebrated American architect Peter Forbes. He has designed numerous private homes in NY, MA and Maine. He built the public library of Southwest Harbor and a church in Sacco, ME. He also designed many of the “Origins” stores in CA, CT.

He is most known for a spectacular glass and steel home built on Mount Desert Island in Maine, where he created a maximum advantage of the views while making a minimal impact on the site.

To build this addition in Millburn, Peter called on a former Associate Tim Weiler. Weiler at the time was building commercial and industrial buildings as a principal with Aegis Building Systems in Califon, NJ. The company’s pre-engineered steel buildings were assembled much like the Maine house Forbes had designed.

With E2 windows and the steel beams, this home has the framework and strength of an industrial structure. The insulated, double paned windows are energy efficient E2 (low emissivity) and have a reflective coating which rejects solar heat gain without significant reduction to visible light passing through the glass.

The Great Room: Let there be light – and lot’s of it!

The floors on the first floor are wood and granite and large granite waterfall fountain adds to the serenity of the space. The beautiful glass chandeliers create a sense of expansion in this lofty addition.

At dusk, the house is a glowing enigmatic jewel box built on a backdrop of unspoiled nature. 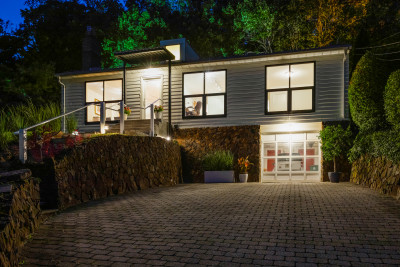 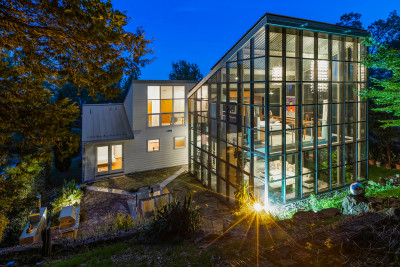 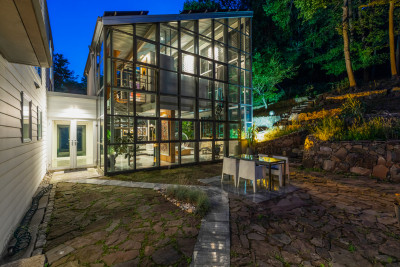 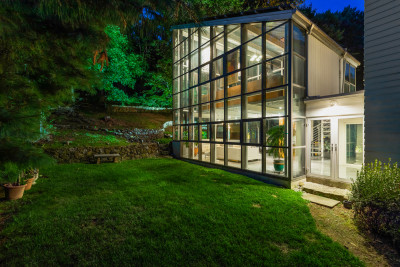 Pure white paint is used to emphasize and reflect the light throughout the rest of the home.

The functional, modern kitchen is open to the dining room and has stainless steel counters and Bosch oven and range. It overlooks the patio, garden and South Mountain Reservation.

The living room overlooks the front yard and has a wood burning fire place imported from Paris (from a Baron Georges-Eugène Haussmann building) and the dining room provides an intimate space for entertaining.

The house has a total of 5 bedrooms and 41/2 full baths. The first floor offers 3 bedrooms and two full baths and the second floor, accessible from 2 separate staircases offers a guest suite or alternate master with vaulted ceilings and a full bath and a loft like Master suite.

One of the bedrooms is currently being used as an office and has a striking built-in desk made of a 6X14 ft slab of granite.

The brushed stainless steel circular staircase which takes you up to loft-like mezzanine master suite is part art and part architecture. The Master offers a spa-like bath with soaking tub, double vanity, built-in closets and floor to ceiling windows all around, from which to watch changing seasons.  The bed hangs from stainless steel ropes attached from the ceiling. Truly a tranquil, private sanctuary. 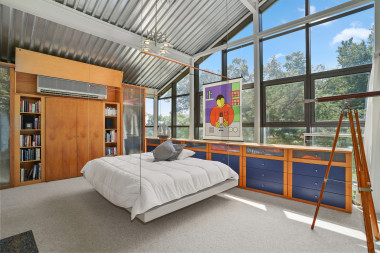 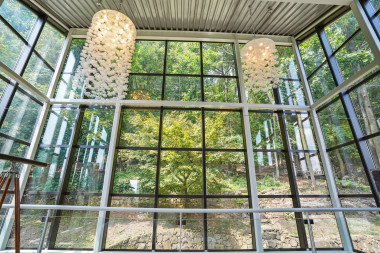 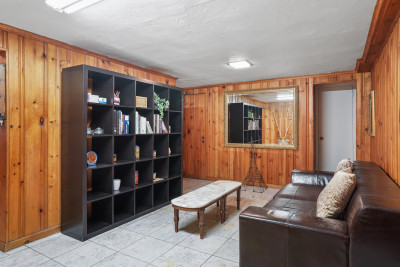 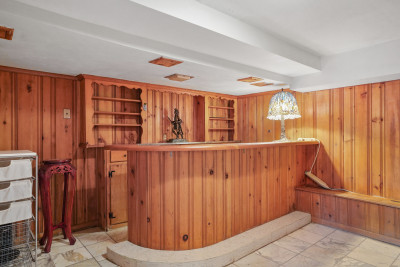 Lost in nature? Or 5 minutes from town? Why not have it both ways? 51 Sagamore’s central location is ideal.

The towns along the Midtown direct train line are eternally popular for those looking for good schools, more living space and a yard while maintaining an easy commute to New York City. Whether you walk, bike, drive or take the train to accommodate your lifestyle, this central location is ideal.

The 6 Phases of the Home Buying Process

Mark Yecies co-founded SunQuest Funding in July 2002 and brings a strong and rich history of financial services experience to the table. Mark graduated Washington & Jefferson College with double degrees in Math and Sociology. As an expert in residential real estate and mortgage lending since the mid 80’s, Yecies is frequently contacted by, and quoted in, the New York Times and other print and television news outlets. As part of his commitment to being a resource for his community, he serves as Vice President for the Executives Association of New Jersey and recently sat on the YMCA board of directors.

Get your home's value - our custom reports include accurate and up to date information.